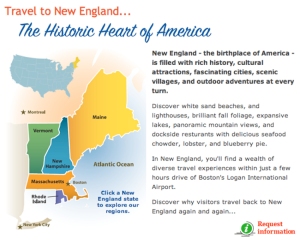 I was breezin’ through the Saturday pages of The Hartford Courant only to be shocked by the fact that Connecticut is no longer part of New England.  In fact, if you log on to the “Discover New England” website, you’ll find Connecticut wiped off the map — literally. So much for being the Constitution State.

Spending austerity hits home when your government (and mine) faces a $13+ trillion deficit. But the Connecticut’s state fiscal deficit is so high, it’s had to eliminated the budget for tourism marketing. To make matters worse, the state failed to pay the 100,000 in annual dues for this fiscal year, and as a result, had its privileges as a “New England” state revoked. It’s only a matter of time before Connecticut becomes the little state that could…but didn’t. 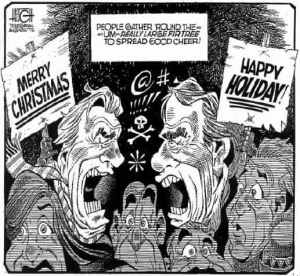 In this day and age of political correctness, you’ve really got  to watch what you say (or do for that matter).

The days of the “Merry Christmas” moniker are now over. True, as a Christian, I celebrate Christmas, but there are other religions — Chanukah, for example is a Jewish holiday pertaining to the 8-day menorah lighting. There’s also Eid al-Fitr — celebrated by the Muslim world. Kwanzaa, on the other hand, is the only non-religious holiday to be celebrated in December.

Santa Claus may be comin’ to town to all the good Christian children, but Jewish children and Muslim children and children of other religions feel left out. As a result, we can no longer say “Merry Christmas.” It’s “Happy Holidays” now. But let’s be honest — have we ever said “Merry Christmas”? If so, who gets offended by Santa Claus?

There’s an iPod-ful of Christmas carols that fill the airwaves and get you in the holiday spirit. That is, if you’re into that. As for me, I got fa-la-la-la-la comin’ out my ying-yang. But because there so many Christmas carols out there and to give Jewish kids something to celebrate during Chanukah, Adam Sandler developed three different variations of “The Chanukah Song.”

No matter what the season, there is always a reason to be politically correct. But political correctness needs to have its limits.

It’s that time of year again! Christmas. Hanukkah. Kwanzaa. Take your pick. Well, here is a parody of “Feliz Navidad (I Want to Wish You a Merry Christmas)” by José Feliciano. Enjoy!