Is April really the cruelest month? Here are a few facts of events that occured in the dreaded month:

And more recently:
• On April 19, 1995, a truck filled with explosives detonated outside the Alfred Murrah Federal Building in Downtown Oklahoma City, killing 168 people, including 19 children.

• On April 20, 1999, Eric Harris and Dylan Klebold, both senior students, went on a shooting spree in Columbine High School in Littleton, Colo., killing 12 of their classmates and one teacher. They later committed suicide.

• On April 16, 2007, Cho Seung-Hui, an English major at Virginia Tech, embarked on a rampage and killed 27 students and 5 professors before committing suicide.

Mother Nature tends to play jokes on us in April, too. We went from 90 degree weather at the beginning of the month to bitter cold and a good soaking rain as the month progresses. Reminds me of a Lewis Black comedy bit. “No matter where you go, one day it’s 90, then it’s 30, then it’s 80 then it’s 20, and my balls can’t take it.”

Today, in light of Arizona’s boneheadedness of handling illegal immigration, many other states are boycotting anything having to do with the Arizona name. Like Arizona Ice Tea for example…which is made in New York.

The Dow Jones Industrial Power Shareholders lost 213 points, causing it to slip below the 11,000 mark today.

In light of the fall of the Dow, Goldman Sachs was getting grilled as CEO Lloyd Blankenfein and other Goldman executives tried to explain themselves before a panel of U.S. Senators. Among the Senators interrogating Goldman execs was Democratic Senator Carl Levin, who ripped Blankenfein on the company’s “shitty deal” e-mail. Um…. you can’t make this mess up.

Arizona can now count me out as a tourist.

A law signed by Arizona’s Republican Governor Jan Brewer allows police to question anyone in the southwestern border state they believe may be an illegal immigrant, even if they are not suspected of committing another crime. If stopped by police, the persons suspected of being illegal immigrants must  show a document proving their legal status, like a “green card” permanent residency document or a passport. To think, the police don’t have a valid reason to pull over anyone for sneaking into the country — even if they were born in the United States, let alone Arizona.

Don’t get me wrong: I don’t mind being stopped by the police, but it’d better be a legitimate reason for them to stop me. And the color of my skin ain’t one of them. The bill becoming law infuriated democrats in Arizona, especially Congressman Raúl Grijalva. He vowed to “overturn this unjust and racist law.”

Addressing the demonstrators, U.S. Democratic Congressman Luis Gutierrez from Illinois said the controversial law would not take effect for 90 days. “In these 90 days, we will demonstrate our solidarity,” he said, addressing the protesters in Spanish. “That’s why we are here.”

To make matters worse for Arizona, a group of vandals smeared a swastika made of refried beans onto the glass doors of the Arizona State Capitol Building. That is hate. That is racism. Racism and hate have no merit in this country. This is the 21st century. Let’s all grow the hell up and focus on the economy.

The *New* KFC Double Down

Kentucky Fried Chicken, or KFC for short (depending on you generation), just introduced the world’s first bunless sandwich called the Double Down. This sinfully satisfying concoction consists of two strips of bacon, two slices of cheese — Monetary and pepper jacks — and Colonel’s secret sauce (yes, they have one and no, you can’t get the recipe for it. It IS, well, a secret.) layered between two pieces of chicken filet be it grilled or the original recipe. As the company brags about its sandwich: “it’s so meaty, there’s no room for a bun!”

This is definitely NOT for the health conscious. According to KFC’s website, the Double Down Sandwich contains 540 calories, 32g fat, and 1,380mg sodium using the Original recipe chicken. The Grilled version is not much better. That’ll run you 460 calories, 23g fat, and 1,430mg sodium. Good enough to make the Atkins diet enthusiast very happy!

As we all know, tomorrow marks the 15th anniversary of the Oklahoma City bombings, which killed 168 people — including children. I could remember that day like it was yesterday. I was 12 at the time. I was at a social studies class at Martin Luther King, Jr. School in Hartford when American militia sympathizer Timothy McVeigh detonated a truck filled with explosives outside the Alfred P. Murrah Federal Building in Downtown Oklahoma City. It sent shock waves down to my spine that terrorism, be it domestic or foreign, can leave a devastating blow to our freedoms.

Terry Nichols, McVeigh’s co-conspirator, had planned the bomb preparation. In total, more than 680 people were injured, while buildings, homes, and cars were damaged or destroyed. The estimated cost of damage was at least $652 million.

Could anti-government protests be to blame for the Oklahoma City bombing? To discover how the tea party works, you must follow the history books. Colonists living in America circa 1773 were fed up with taxes issued by the British government and, as a result, refused to return the taxed tea to Britain. Thus, the Boston Tea Party became a battle cry against unfair taxing by the British parliament. The slogan is simple: No taxation without representation.

What’s the tea party of the 21st century? You may think President Obama is radical, but the hard right takes the cake on extremism. Their mantra is based on hate, anger, and destruction. They hating because now that we have our first black president (or African-American president), they think they cannot win back this country. And they refuse to back down without a fight. This oftentimes results in violence, including death threats, against public officials, senators, federal employees, and other service workers. Also, do not be fooled by Sarah Palin’s high heels. She’s not afraid to get down and dirty on “stickin’ it to the man,” if you will. And the labels such as “baby killer,” “liar,” and “hypocrite?” All of them used by the hard right tea partiers are intended to attack the party in power. When is this B.S. going to stop?

That’s my 2¢, but the lives changed by the Oklahoma City tragedy are priceless.

Some very sad news for those expecting to see Connecticut’s own Katie Stevens move on in season 9 of American Idol, she was one of the two contestants voted off last night due to a low number of votes. That’s got to be a big punch in the stomach if not a slap in the face to Connecticut. But did her rendition of Kelly Clarkson’s “Breakaway” kill her chances to advance another round?

Hard to believe it, but Katie is only 17. 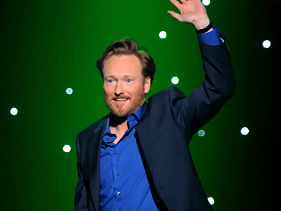 Starting this November, Conan O’Brien will start his own late-night show, and forget NBC, ABC, or Fox, he’s movin’ on up…to basic cable. More specifically, his new show will air on TBS. The show will air at 11 p.m., bumping George Lopez’s late-night show to midnight. Hey, it’s a small price to pay.

Conan O’Brien hosted NBC’s The Tonight Show for eight short months before extremely low ratings on his predecessor Jay Leno’s prime-time show force him to give Leno his old job back. To make matters worse for Jay, Kevin Eubanks, his long-time sidekick and bandleader of The Tonight Show Band had announced he was leaving The Tonight Show after 18 years. But fear not Leno fans: Darius Rucker from Hootie and the Blowfish is slated to replace him.

Tina Fey returned to Saturday Night Live last Saturday as a recent host. Many of us often had her confused with ex-Alaska governor Sarah Palin, and, every so often, Ms. Fey puts her own spin on the half-term governor in the recent SNL skit. Abraham Lincoln must be rolling over in his grave when this came on…just sayin’.

A plane carrying 132 people, including Polish president Lech Kaczynski and his wife crashed in Russia, killing everyone on board. He was scheduled to attend a meeting held in Russia for the 70th anniversary of Katyn Forest massacre. Instead, Russian President Dmitry Medvedev declared a day of mourning over the plane crash for tomorrow. The body of Lech Kaczynski had been flown back to Poland later today.

Among the American cities with very high Polish population, e.g. Pittsburgh and Chicago, the city hardest hit by the tragedy is in New Britain, Connecticut, where about 1/4 of the city’s population is of Polish descent. For more on how the Polish community is coping with the tragedy, go to:
http://www.nbcconnecticut.com/news/local-beat/CTs-Polish-Community-Mourns-Late-President-Kaczynski-90566054.html

more about “Tragedy in Poland“, posted with vodpod 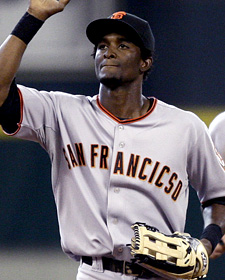 Whoever misspelled the city of origin for the Giants’ baseball team jerseys is in GIANT trouble. Just ask poor Eugenio Velez, who had to don a top jersey with the name “San Fran-cic-so.” Seriously, you can’t make this stuff up.

But the Giants pulled through, beating the Houston Astros 10-4.

Call me crazy, but didn’t we notice a jersey mistake last year? Last April, Adam Dunn and Ryan Zimmerman of the Washington Nationals wore jerseys reading “Natinals” for three innings. I don’t know what a “Natinal” is. Anyways, the company that made the uniforms was aware of the mistake and apologized for it. Just don’t ever refer to the World Series Champions as the New York “Yanees” or I will be forever pissed.

Life with the DareDevyl
Blog at WordPress.com.